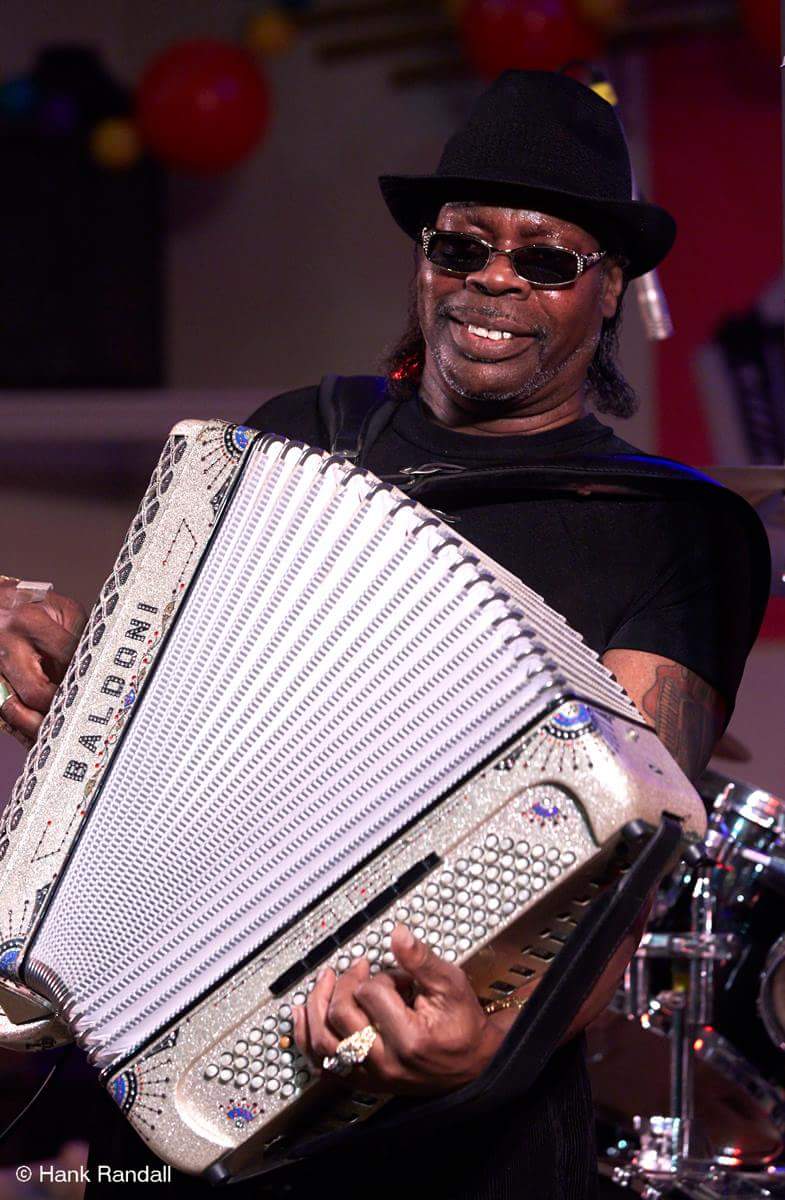 Living Blues magazine hails him as "The best living zydeco singer and accordionist."
"Complex, driving rhythms force you to dance. A powerful, soulful vocal delivery forces you to listen" .. The Chicago Defender

To his legions of fans, he's the man whose music moves them deep in their souls, and to those who love to dance he's the man who makes holes in the soles of their shoes. He is the source of the infectious, rhythmic music fueling the wild dance parties that erupt whenever he plays. He is Clayton Joseph (C.J.) Chenier, son of legendary zydeco master and pioneer, Clifton Chenier.

Carrying on the legacy of his late father, "The King of Zydeco" Clifton Chenier, C.J. has been fronting the famous Red Hot Louisiana Band for almost 2 decades, reinvigorating the genre with his exceptional musicianship. C.J. Chenier records on the Alligator Label. He has garnered several "Zydeco Album of The Year" awards, consecutive Living Blues Critics awards, and a 1997 NAIRD Indie Award.

Connollys is a restaurant with tasty food, a full bar and a great wooden dance floor
We welcome all people who love and want to support Live Louisiana Music 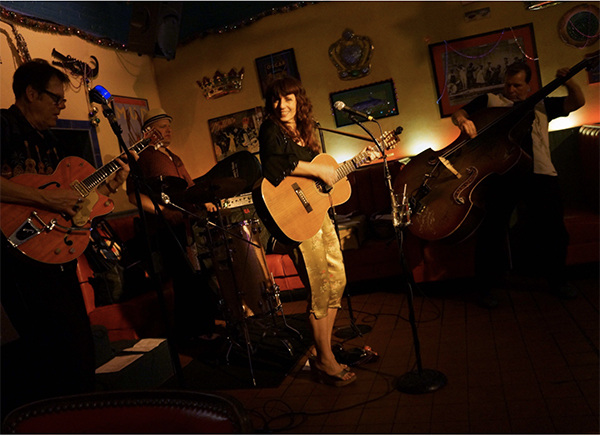 Monica Passin (Li’l Mo),brings her full band to Connolly’s on April 9th. It's a change up from our traditional zydeco bands... Li'l Mo and the Monicat's previous shows at Connollys have been highlighted as well as illustrated in The New Yorker, and I am personally really looking forward to this show.

The Monicats will keep you dancing to old-school country, rockabilly, swing, jump blues, and 60s pop-inspired songs. We have a special dance lesson with guest teacher Barry Koffler in the basic country western dance styles. Don’t miss what has now become an annual extra-special show!

Bill Kirchen, Titan of The Telecaster, wrote the liner notes the recent  Monicats album, Whole Lotta Lovin’: “Boy, can she sing. Monica is a triple-threat, a chanteuse who can rock and write songs you swear you grew up with. This is the real deal, a captivating singer with soulful new material, and a voice that breathes life into some choice classics.”

VIEW LISTINGS OF PAST YEARS AND SHOWS HERE!!! 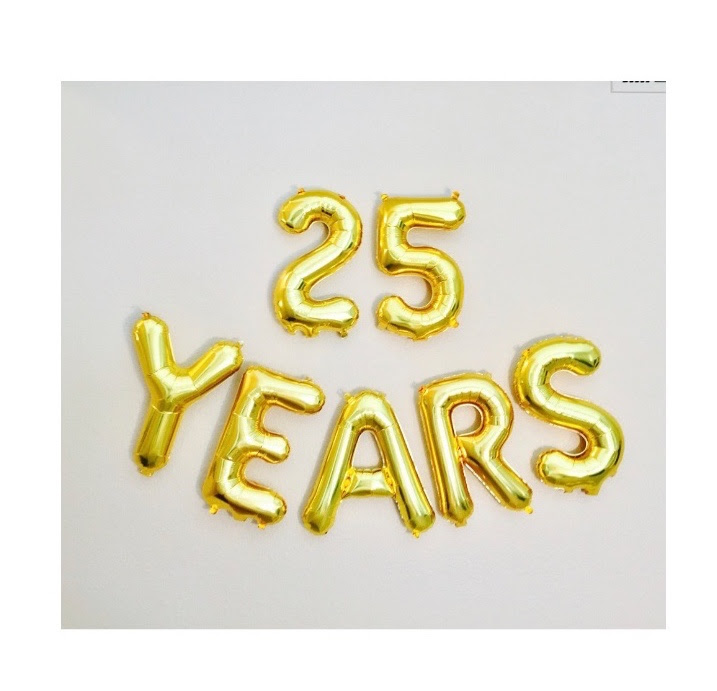 She’s got a killer line up so far for her 25th, and we’re honored to be part of this important celebration. We’ve been in the game for 35 years and performed on some of the coolest stages in NYC: Central Park fundraiser w/Dr. John, Celebrate Brooklyn (they are really good friends of the band who still present us!), Tramps, LoneStar Cafe, Carnegie Hall, Lincoln Center Outdoors, Midsummer Night Swing, etc. etc.

Over the years many presenters have simply stopped presenting this, dynamic + lively + joyful American black roots music genre, but Laura has kept it alive and in the hearts and heads of people who patronize her shows. Merci beaucoup to you Laura, fro TS + TZE 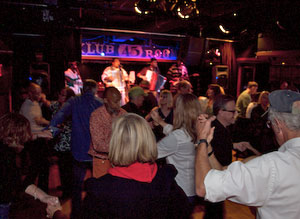 Sign up for email updates by emailing [email protected] 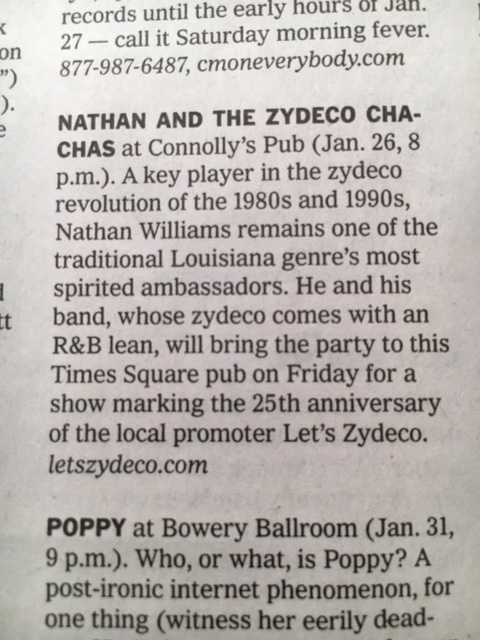 LET'S ZYDECO and C.J. CHENIER featured prominently in the March 3rd, 2014 issue of The New Yorker...

(the entire page 7 "Goings on About Town" with commissioned photograph by Dan Winters)
http://nyr.kr/1lnwoZH

Follow up to Benefit for the Siller Tunnel to Towers Hurricane Sandy Fund:

Last month's event with Rosie Ledet, Actor Michael Cerveris and his band Loose Cattle, and Evacuteer.org was an amazing success. We were able to donate approx $3,000 to The Siller Tunnel to Towers Hurricane Sandy Foundation. And also make connections with New Orleans, and also NOLA transplants in NYC. Thanks to all of you who participated.

Let's Zydeco was in the news again for the special Bye Bye Hurricane Season event.

Two Hurricane Sandy benefit dance parties one in New York City, one in New Orleans – linked live in real time this Friday, via Skype and big screen TVs. The Big Apple and the Big Easy have always shared a love of good music, good food and good times. Now, of course, NYC and NOLA share hurricane survival and recovery."

Read the article by Evelyn Kanter, here:
NY On The Cheap

"It's another Louisiana Saturday – night except it's at Connolly's Irish pub/restaurant just off Times Square, where it's packed tighter than crawfish in a trap at another Laura Selikson-hosted Let's Zydeco dance party. She's been bringing top South Louisiana dance bands - including BeauSoleil, The Savoy-Doucet Cajun Band, C.J. Chenier & the Red Hot Louisiana Band, The Pine Leaf Boys, Steve Riley & The Mamou Playboys, along with newer groups like L'Angelus, Curley Taylor & Zydeco Trouble--once or twice monthly ever since January, 1993.

Read the full text of Jim Bessman's article at examiner.com

View a fabulous illustration of Rosie Ledet that appeared in print and online at newyorker.com.

Let's Zydeco is on Youtube.com

Check out this awesome video of Cajun fiddle band L'Angelus, shot at a Let's Zydeco event at Connolly's, NYC, October 2009

The Saturday, March 6, 2010 LETS ZYDECO show with Steve Riley & the Mamou Playboys was chosen by THE NEW YORK POST's "Weekend Calendar: Hot Picks in Entertainment" They only choose 2 film, one news event, one art event, and one music event, and this show was the one Music Event chosen for the weekend (NY Post, 3/5/10) Thanks to the Post!

Sign up for email updates by emailing [email protected]

Born on the Bayou, Let's Zydeco and Cajun with Laura Selikson at Connolly's an article by Bonnie Rosenstock on exploredance.com March 8, 2009

This article gives a great description of our events, and at the bottom are some wonderful photos View Explore Dance article

Valerie attended several events, and at the July 23rd show with Geno Delafose & French Rockin' Boogie, she interviewed many participants. A professional photographer, Rachel Papo, was sent by the NEW YORK SUN To the August 20th Steve Riley & the Manou Playboys event. Download the article as a PDF

September 19, 2008 - Highlighting our new season, WFUV.FM 90.7 does a set featuring Zydeco stars from our line-up.

March 4, 2007 - Read this New York Times article about The Pine Leaf Boys who appeared at LETS ZYDECO March 4th show at Connolly's in NYC. Download the NY Times article as a PDF

December 3, 2008 -THE NEW YORKER highlights LETS ZYDECO holiday event with Li'l Mo & the Monicats in the "On the Horizon" section. Read all about it here.

Since Katrina hit the Gulf Coast, LET'S ZYDECO held a fundraiser with proceeds sent to The Louisiana Disaster Recovery Foundation, Inc., and 2 benefits with proceeds going directly to The Bruce Daigrepont Cajun Band, a band from New Orleans who was hit hard by the hurricane.

Our thanks to all who helped make these events a success.

Aaron Latham is best known for his novels and screenplays, including URBAN COWBOY. He has been a regular contributor to such publications as Esquire, The New York Times, Rolling Stone, and New York Magazine.

After an initial run at Jacques-Imo's Restaurant, the play might be opening at Connolly's in the fall – stay tuned!